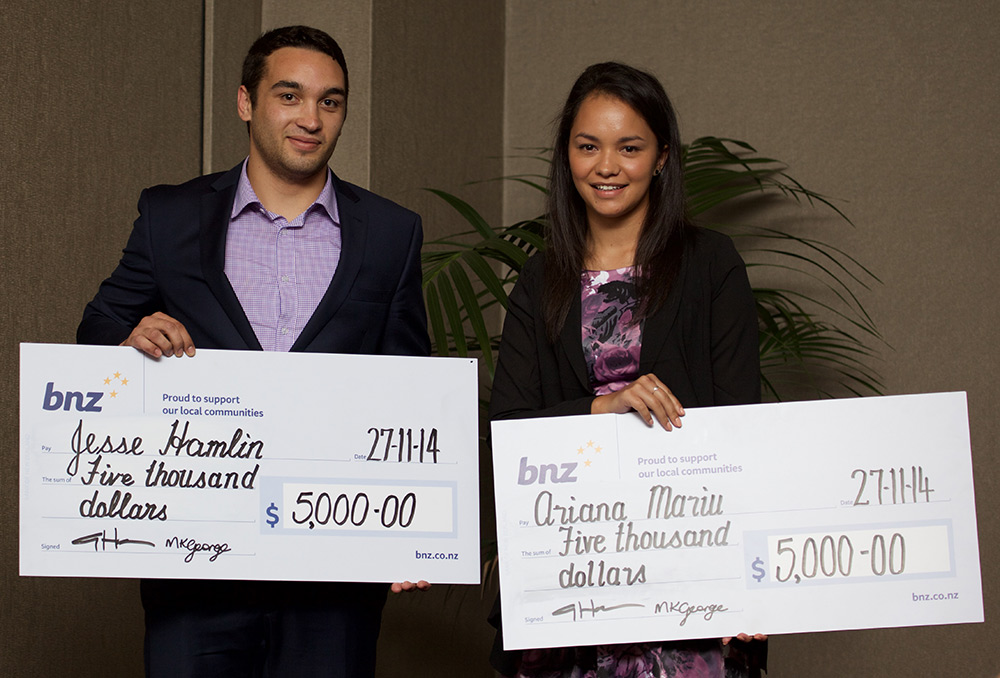 Ariana Mariu (Tūwharetoa, Te Arawa, Hauraki, Tauranga Moana) and Jesse Hamlin (Ngāti Kahungunu, Ngāti Porou, Tūhoe, Ngāi Tāmanuhiri) were announced as the inaugural recipients of the GHA scholarship in a presentation held at Novotel Rotorua last night. Each were presented with a cheque for $5,000 to go towards their accounting studies.

The GHA Scholarship sought applications from exceptional Māori students committed to becoming Chartered Accountants and to working with Māori. In their scholarship essay, applicants were asked to explain why they were ideal candidates for the scholarship as demonstrated by a strong academic record, commitment to tikanga and te reo Māori, and involvement in cultural and community activities. They were also asked to provide academic and character references in support of their application.

Two qualities helped them stand out: one, their determination to succeed in their studies, whānau life, community and work; and two, the staunch support of their whānau as role models as business people and as dedicated members of their communities.”

Ariana will shortly graduate from Waikato University with a Bachelor of Business Analysis majoring in accounting, while still 20 years of age. Next February, she will start her career as a graduate accountant with a large Hamilton-based accountancy firm.

Jesse is in his third year of a Bachelor of Commerce majoring in accounting and finance at Otago University. Jesse is continuing to excel in his studies and his other passion – rugby, which he credits with giving him the confidence to do well in other areas of his life.

The GHA Scholarship is an annual putea of $10,000 and is designed to encourage young Māori into the accounting profession. “Māori make up less than 2 percent of all accountants in Aotearoa,” says Mere, “If we want Māori working with Māori in the economy, we need more Māori in accounting.”

GHA look forward to watching the progress of these two exceptional individuals, and welcoming them into the accounting profession and world of business and commerce.